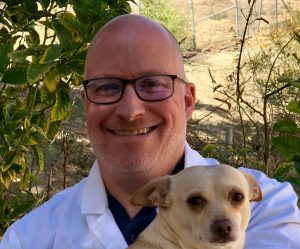 Happy Pets Veterinary Center is proud to introduce you to one of our recent associates and friend of the clinic: Dr. Howie Baker.

Dr. Baker came to us as a bit of a fluke, actually.  We were looking for someone to fill in for a former associate that was going to need to take some maternity leave.  Currently there is a shortage of veterinarians in California and finding great doctors with a lifetime of experience is more rare than a four-leaf clover.  We were very lucky that a client of ours was attending a local networking meeting and met this incredibly charismatic man that was attending for the purposes of promoting a healthy living food system.  A conversation was struck up.  The fact that he was a semi-retired veterinarian who had ran his share of local hospitals came up.  Our hospital and it’s needs were mentioned.  A phone call later and we had our fill-in veterinarian.

It was immediate kismet.  Dr. Baker fit in perfectly, which is not an easy thing as we are a very different kind of hospital than most.  The entire team loved him, the clients loved him, his clients from years past sought him out here.  We could not have asked for anything better.

Unbeknownst to Dr. Baker at the time was that our associate who was leaving on maternity leave also had told us that soon after having her child, she would be moving with her family to another state.  Dr. Howie was a good Band-Aid solution for the short term, but our next major challenge was going to find a permanent veterinarian that met all of our particular qualifications.

Finally, as Dr. Baker was about to finish up one of his last agreed upon shifts, he mentioned aloud that he really wish it could have been a more permanent gig.  Hospital owners Dr. Vega and her husband John just gave each other a knowing look, and before Dr. Baker could leave that day, we pulled him aside, told him of our predicament and need to find a permanent replacement for our departing vet.

His response: “I live about 30 minutes away.  It’ll take me about 10 minutes to find my resume.  I can be back in an hour if it means I get to be the first to apply!”.

We all laughed and made a handshake deal right there and then (these were back in the Good Old Days when you could do things like shake hands).  Since then, Dr. Howie has been a regular part of our team and an all-around wonderful person to work with who fully embraces our creed and values.

So without further adieu, here is Dr. Baker’s bona fides:

Dr. Baker graduated from Colorado State University Phi Beta Kappa with his Bachelor’s in 1984 then with his doctorate degree in Veterinary Medicine in 1987. After moving to California to start a new adventure he worked at the Agoura Animal Clinic until 1999 when he became a founding partner in TLC Pet Medical Centers of West Hollywood and South Pasadena, both are multi-practice specialty and 24 hour hospitals.

Dr. Baker was the Medical Director in West Hollywood from 1999-2012, and then served as Medical Director from 2012-2015 in South Pasadena. At this time he returned to the Agoura Animal Clinic where he continues to work part time. After years of long commutes Dr. Baker joined Happy Pets Veterinary Center because of it’s close location to Acton (I.e. minimal commute time) and the wonderful down home feel that a smaller Veterinary hospital offers to its clients.

When Dr. Baker is not working he can be found playing with his lovely wife Sondra and their two dogs Fanta and Dobby. He also spends his time practicing Suh Do Kwan Kung Fu where he has achieved the rank of first degree black belt. He also works as a professional network marketer for an international health and wellness company and dabbles in real estate investing.

We will do our best to accommodate your busy schedule. Request an appointment today!

We are doing everything we can to ensure the safety of our patients, staff and visitors. From the beginning of the COVID-19 (Coronavirus) outbreak, we’ve been listening closely to the Centers for Disease Control and Prevention (CDC), and other agencies to stay up to date with the latest information.

If you have recently traveled to areas where there are ongoing outbreaks of COVID-19 and/or develop fever with cough or shortness of breath, or if you have had contact with someone who is suspected to have COVID-19, please stay home. We are continuing to keep our office safe and sanitized for you and our amazing staff.

At this time, we are doing everything curbside with notable exceptions. No clients are allowed in the building (the exception being euthanasias, and even then with restrictions). All consults are done via phone at the hospital.

Please feel free to contact us if you have any questions or concerns.

Call Us Text Us